You Have Got to See This

So I was doing my daily blog check and read an entry by the new dorm parents at Sahel about a R.O.U.S. (Rodents of Unusual Size). The first time I read it the picture wasn't showing up so I didn't think much of it...probably wasn't a very big rat! The next time I returned to the blog the picture showed up and it definitely deserves the name R.O.U.S. ! I would have been scared out of my p.j.s if I had had to sleep in the same room with that thing. Check it out.
Posted by Beth at 2:12 PM 2 comments: 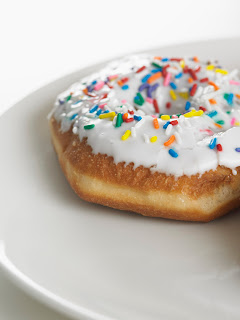 In honor of national donut day, which happened to be last Friday, I thought I would share a funny interchange I had yesterday with a child at church. After the service, I happened to pass a little boy who was probably about 3 and a half or four years old who was standing at the feet of his mother and happily munching on a chocolate cream filled donut. He didn't know me, but who can resist talking to a little boy obviously enjoying getting messy with a donut? So I stopped, pointed at his donut and said something like, "Oooh, are you eating a donut?" He immediately turned his whole body away from my pointing finger so I thought he was going to be shy and not talk to me but he actually responded and when my finger went down he turned back towards me. "What kind is it?" I asked, once again pointing. Again, he turned his body away but responded, "Chocolate." By this time, I realized that he was quite concerned that I was going to take his donut away. He didn't want my finger anywhere close to it. I persisted, reassuring him that I wasn't going to take it from him, I pointed to the cream and asked him, "What is that stuff in the middle?" Keeping his donut as far away from my finger as possible, he looked up at me and said, "I don't know. I don't work here!" Kids crack me up sometimes.
Posted by Beth at 2:12 PM 2 comments: