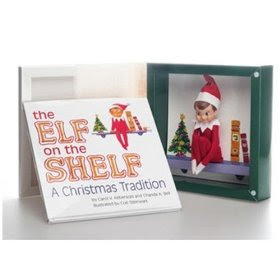 I've never read The Elf on the Shelf before but I just read about it on someone's blog and it sounds like so much fun that I want to try it myself. Apparently, it's about an elf named "Scout" that Santa sends to make sure that kids are behaving well and you can get a little elf to go along with the book. Then every day leading up to Christmas, Scout takes up a different position in the house to "spy" on the goings on and report back to Santa. As a teacher, I always have a hard time making up my mind whether I really want to promote Santa or not...so I really don't say much about it but wow, I can only imagine the power of this elf to improve classroom behaviour if he were to suddenly appear in the days leading up to Christmas. That...you've got to love!
Posted by Beth at 10:08 AM 2 comments:

Here's an interesting picture from the world of aviation missions...head on over to this blog to get the scoop.
Posted by Beth at 7:41 AM 2 comments:

After an Afternoon in the Sous-sol 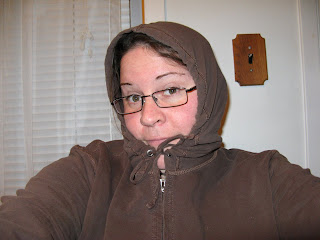 So this is me after one afternoon in the "sous-sol" (basement) of the girl's dorm/cafeteria on campus...and you are not even seeing the bottom half where I've wrapped my legs in a blanket, put on two pairs of socks and my slippers but my feet are still cold. It was cold down there! Thankfully it's not my usual place for studying but we were having an internet access problem in our building so I thought maybe I could pick up wireless down there and perhaps get some help from Google translate. No such luck. So it was me, my dictionary and my verb conjugation book writing my testimony in French in the sous-sol. I guess I could have gone home where it was warmer but sometimes home is distracting and besides I thought if I stayed in the cold, I might get it done faster.
Now some random thoughts on Winter...somebody should write an extremely happy song about walking in a "Static Wonderland." Static everywhere...this morning my pants were clinging to my legs so I decided to put on some static guard and accidentally reached for my bottle of mousse in the dark...yep, I pressed the button, listened to the juicy, bubbling sound and thought, "That is not what static guard sounds like!"
I can't believe it but there is actually iced up parts on the river that runs through the middle of Sherbrooke. Yikes! And supposedly the hardest part of winter is January. Here's to remaining just warm enough not to become a human popsicle this year!
Posted by Beth at 5:24 PM 1 comment:

I just thought you all might like to know that I had my first real true round of "kissing" goodbye! I went to a little storytelling night with my friends Katye and Sheila and some how a round of goodbye kisses got started and I felt obligated to participate. It's weird for me! Definitely take some time to get used to.

Someone I know got a love letter today.... 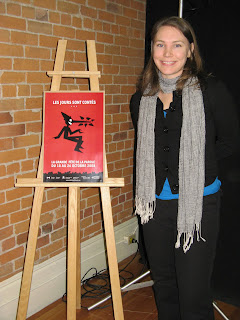 One of the joys of being here in Quebec has been the opportunity that I have had to get to know my friend Katye. She's a Georgia girl and God has gifted her with a wonderful ability to tell stories. At the beginning of the summer, she felt that God was leading her to come and study French for a semester here at Parole de Vie Bethel. She didn't have all the financial resources she needed but she proceeded on faith that God was going to provide.


One evening in September, Katye and I went with our friend Sheila to listen to a French storyteller. Before her presentation, the French storyteller, Petronella, came and greeted us. She found out that we were students of the French language and we told her that Katye was a storyteller. Petronella was excited about Katye's ability to tell stories and by the time the evening ended she had actually extended an invitation to Katye to participate in a storytelling festival in the city of Sherbrooke in October. Mind you this invitation was extended without Petronella even hearing Katye tell a story! We've marveled over this quite a bit.


At the beginning of the festival, we participated in an opening evening and another storyteller mentioned to Katye that they were the only two storytellers who would get paid. Katye hadn't heard anything about that up until that point and she was just happy to be able to have an opportunity to participate. Several weeks ago she got to tell her stories which she tells in a mixture of French and English. I didn't get to see her performance but according to our professor it was "Incroyable!" She told in two different locations, God provided rides to and from both locations and it sounds like she really had her audience hooked. When she summed up the experience for me, she essentially told me that God had brought about all these events just because He loved her.


Well, Katye received a love letter today and I was there when it happened! She got a letter from the organizers of the event with a check. We both were in shock when we looked at it. It was a check for $400! I don't think either one of us could believe it. We had to get it checked out by our professor. Unbelievable, God wrote Katye another love letter in the form of that check! Her school bill has been cut in half. He has provided for her just because He loves her!


What kind of love letter has God written to you lately?


Marvelling in wonder over His love!
Posted by Beth at 1:29 PM 1 comment: